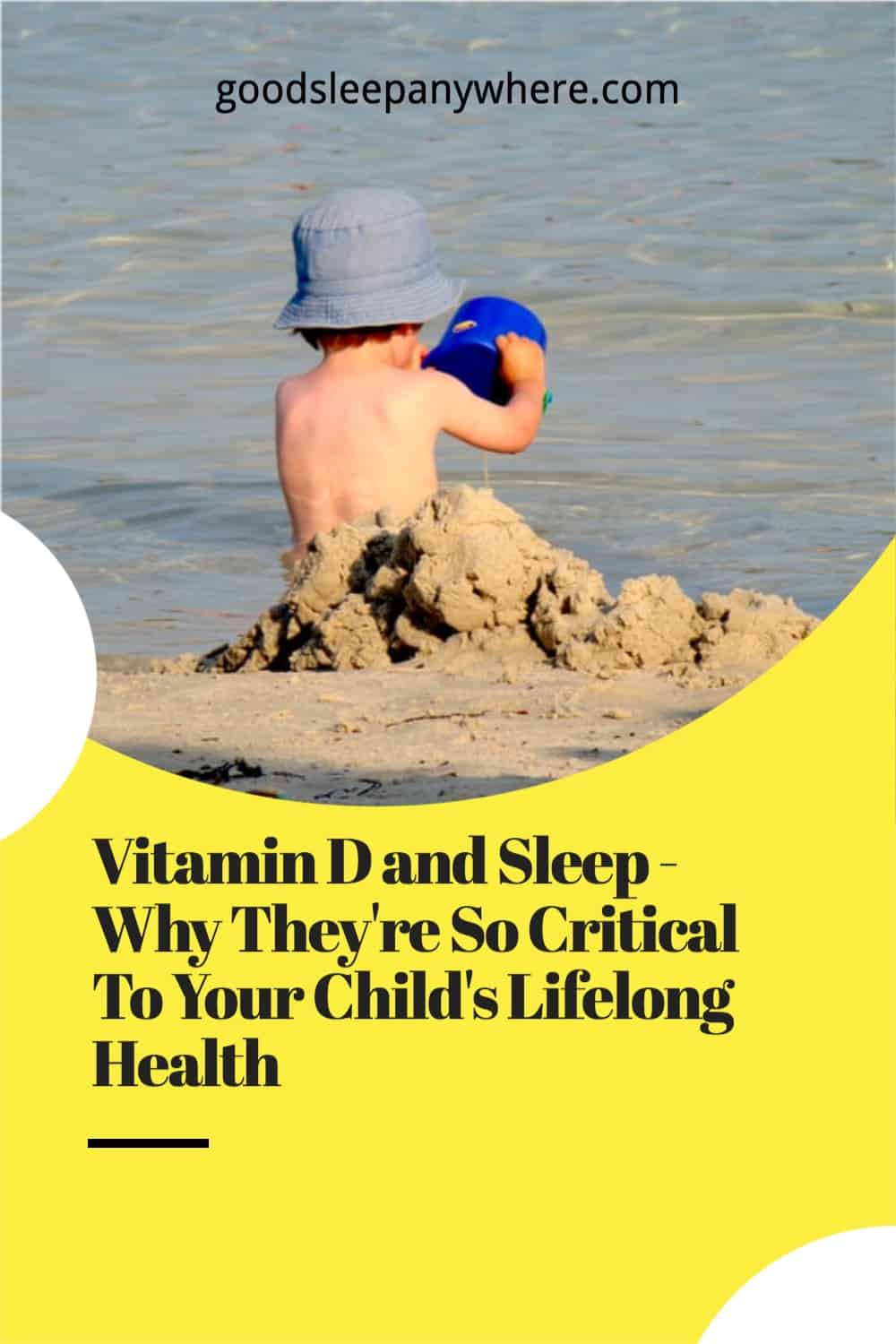 Lack of sleep in children is not only about the usual morning drama of trying to get your kid up in the morning. It can have devastating effects on your child’s life-long health and is nothing we should take lightly.

While sleep deprivation in children is mainly linked to early school start times, busy schedules, screen-related distractions, and other external pressures, there might be another contributing factor that is often overlooked: vitamin D deficiency. Recent studies have suggested that our vitamin D levels may have a substantial impact on our sleep quality.

Given that restful sleep is probably the most crucial factor for your child’s overall health, let’s look at how vitamin D can help your child (and yourself!) sleep better and how you can ensure that your child gets enough vitamin D levels in his or her body.

What is vitamin D?

To understand how vitamin D helps you sleep better, you first need to know what vitamin D is.

It may surprise you, but vitamin D is actually not a vitamin. Instead, it’s a group of fat-soluble steroid hormones produced in your skin when exposed to natural sunlight. Aside from sunlight, it is also found in some foods such as salmon and tuna, beef liver, cooked egg yolks, and some mushrooms.

What makes vitamin D so powerful is that it can go through the membrane and make effective changes. So this is not just some vitamin that you need to supplement with; it’s actually a hormone that changes the way your cells in the body behave.

What are the main functions of vitamin D?

Vitamin D is critical to the body’s mental and physical function. One of vitamin D’s primary functions is to absorb and maintain adequate calcium and phosphate concentrations in your body to allow normal bone mineralization and prevent involuntary contraction of muscles leading to cramps and spasms.

Other functions of vitamin D in the body include reducing inflammation and modulating processes such as cell growth, neuromuscular and immune function, and glucose metabolism. Many genes encoding proteins that regulate cell proliferation, differentiation, and apoptosis are modulated, in part, by vitamin D.

What are diseases caused by lack of vitamin D?

As vitamin D is required for bone growth and remodeling, a lack of it can cause rickets in children and osteomalacia or osteoporosis in adults.

The impact of vitamin D deficiency on sleep

Although the exact relationship between vitamin D and sleep is still in the earlier stages of research, it’s already safe to say that insufficient vitamin D can lead to several sleep problems, including insomnia and sleep apnea, and overall poor sleep quality.

As you have seen, there is a close connection between vitamin D deficiency and diseases, and each of these diseases harms the quality of sleep. A good example is chronic, nonspecific pain that often causes poor sleep.

Vitamin D deficiency has also been linked to increased inflammation of the nose and tonsils, leading to obstructive sleep apnea and thus disturbed sleep, especially if you are already at higher risk for developing these disorders.

Research suggests that vitamin D may play an immunomodulatory role by affecting immune regulation and decreasing the release of inflammatory substances that regulate sleep itself, such as prostaglandin D2, tumor necrosis factor-alpha (TNF-a), and other cytokines.

Vitamin D is vital for physical and mental development

Also, vitamin D receptors are present in almost all body tissues and widely distributed in the brain, including those known to perform essential sleep regulation tasks.

In other words, if your brain lacks vitamin D, it’s challenging to maintain a healthy sleep pattern in which you consistently cycle through the different Non-REM and REM sleep stages. Each of these stages serves a different purpose – however, they’re all equally important.

Not getting into the right sleep phases and missing out on deep sleep or REM sleep can have long-lasting severe health consequences, especially concerning children and young adults’ physical and mental development.

Why is enough restful sleep so important for children?

Not getting enough restful, good quality of sleep is essential for children because they have much more things to do than an adult if you think about it. Adults have to remember everything they did today, whereas children have to do all that – and grow their bodies and develop their brains.

A disorder within the sleep system at an early age so that the nightly repair is not occurring as it should mean they’re not developing correctly between age 0 and 20.

The importance of sleep for your child’s sexual development

Although we all go through this boost in the sexual hormones in puberty, we’ve all been sexualized from 1 year old. Hormones from a child’s brain affect how the child looks at the world even at age one. If children don’t get the sleep they need, their brain and with that, their sexuality doesn’t have enough time to develop.

Lack of sleep may lead to social problems

So we don’t pop out ready to go; we have to develop every part of our brain, and in this system, sleep is essential. If you shorten the amount of restful sleep, you also shorten the development time of the brain.

The brain then has to triage what to develop and focuses on the things that ensure survival while putting social interaction last. If you take out social interaction, you probably may not mate and likely won’t produce offspring, but you’ll still be able to survive.

However, the child’s mental development is falling behind, which is why researchers increasingly suggest there may be a link between lack of healthy sleep and growing autism, depression, and anxiety among young people, sometimes coupled with a negative body image or a feeling that their bodies don’t fit.

The good news is that if your child gets the right amount of good quality sleep, then the brain also gets back everything it needs because the brain knows what was left off – even at age sixteen. It keeps a record of the deficiency states, of every single thing it has not had time to do.

So if you pay attention to the fact that your child is not sleeping normally, then that’s where you need to focus on for your child to catch up with his sexual and social development.

The problem of poor sleep caused by lack of vitamin D in children can be very subtle because many children don’t report that they don’t sleep. Meaning they do get their 8 to 9 hours of sleep, and you wouldn’t think they have some sleep disorder. However, since their sleep quality is so poor, they have trouble getting out of bed in the morning and feel tired all day.

So if that’s what you’re seeing in your child, it could be that they have a vitamin D deficiency. And instead of repeating the usual morning madness of rushing and reminding, the solution is to fix your child’s vitamin D levels.

The good news is that’s something you can impact without extensive treatment, blood testing, or giving pills. All you have to do is tell your child to go outside more often without putting sunscreen immediately on their skin. Of course, you don’t want to get your child sunburned, but you have to adapt sunscreen usage to the child’s skin type.

The easy fix is to let your child spend more time outside!

Unfortunately, we turned into a population living inside in air-conditioning. Did you know that we spend on average only about 7.5% of the day outdoors? Some kids actually won’t leave the house at all.

Direct sunlight exposure is the best way to ramp up your child’s vitamin D storage. When they spend more time out in the sun, their bodies automatically start producing vitamin D from cholesterol. The more time they spend in the sun, the more vitamin D their body will get. It’s actually possible that the kids make all their vitamin D every summer.

If your child spent the entire summer outside, you might see your child in September getting easily up at 6 am. She is not driving you crazy, and there is no fighting over the bathroom; instead, she is relaxed, happy, interested, and ready to go. That means she just had a perfect night’s sleep!

And it’s not because it was the summer break. It’s because she spent the summer outside, and her body could make all the vitamin D it needs to sleep well.

Then when February is around, and you can’t wake her up in the morning, you may want to give her a little vitamin D supplement until around May, when she goes out in the sun again. You can easily find supplements fortified with vitamin D in drugstores or pharmacies.

But then there is the burning question: how much vitamin D should you give to your child?

The Journal of Clinical Endocrinology & Metabolism recommends for children at risk for vitamin D deficiency the following upper limits of daily dietary intakes of vitamin D:

As you can see, what they’re saying is that unless your child is younger than eight years old, the recommended daily intake is up to 4000 international units.

Now I’m not your family doctor, and if you want to know how much your child should take, it’s probably a good idea to consult a specialist. However, vitamin D toxicity is extremely rare, and up to 4000 IU/d are usually considered safe.

One thing to keep in mind is that there is a difference in vitamin D levels and skin color, meaning the prevalence of vitamin D deficiency is greater in people with darker skin. In other words, the darker your child’s skin, the more she or he needs to expose himself to the sun to make the appropriate amount of vitamin D.

So if your child can’t sleep at night or struggles to get up in the morning, although it gets 8 to 9 hours of sleep at night, there’s a good chance that he or she has a vitamin D deficiency. Maintaining sufficient Vitamin D levels is essential for good sleep and thus for your child’s overall health.

The easiest and healthiest way to bring the vitamin D level up is to encourage your child to spend more time outside. To make sure the levels stay that way also during the winter months, you can give your child vitamin D supplements available in almost every submarket and don’t cost much.