Sleep is vital for the health of every person, but especially for children because they grow and develop rapidly in such a short period. The amount we learn at this stage, especially before the age of ten, is phenomenal, and therefore, children must have good sleep basics so that they can learn effectively.

To help your child to adopt healthy sleep habits, it’s essential to understand how babies develop their sleep rhythm.

How does a baby’s sleep rhythm work? 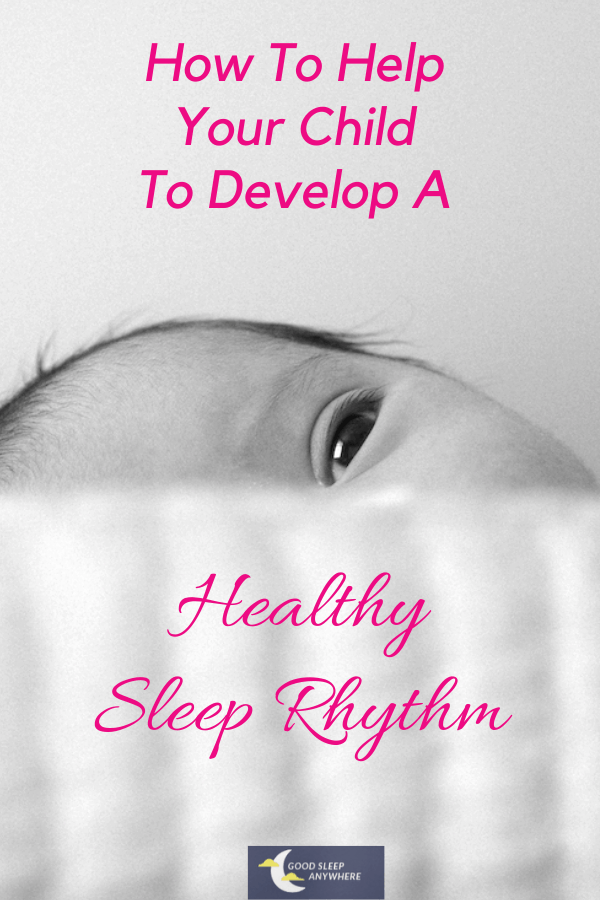 Sleep is the primary activity of the brain during a baby’s early development. The circadian rhythms, or sleep-wake cycle, are regulated by light and darkness. As these rhythms take time to develop, sleep rhythms of newborns are still irregular, but they are already well established.

The development of the natural sleep rhythm starts in the womb. By the 20th to 28th week of pregnancy, the fetus already has sort of a sleep-wake cycle, meaning it shows a change between inactivity and movement.

From the 28th to 29th week of pregnancy, sleep begins to organize itself, and the two sleep stages of “active” (similar to dream sleep) and “quiet” (non-dream sleep) sleep are formed. Later, intermediary sleep is added, a stage between light sleep and deeper sleep.

During this time, the brain waves, including those during sleep, change about every two weeks, which has to do with the rapidly growing brain volume. The brain shows its fastest growth rate during this stage of development. White and grey matter increase and the different areas of the brain with their respective tasks become increasingly differentiated.

Once born, newborns spend most of their time sleeping, and sleep continues to consist of the three different sleep stages of active, quiet, and intermediate sleep. In the first few days, 50 to 60 percent of sleep is active, and 30 to 40 percent is non-active deep sleep. The remaining 10 to 15 percent are intermediate sleep. In the first month of life, we dream more extensively than ever before in our lives.

In the few hours of waking, newborns already absorb so much new information that they have to sleep a lot to process everything new. However, their brain does not yet produce enough of the sleep hormone melatonin. And the GABA receptors, which inhibit or reduce the activity of the neurons or nerve cells and therefore favor sleep, are also not yet fully developed.

That is the reason why newborns do not get tired as we do in the evening when melatonin rises as darkness falls. Instead, they sleep polyphasically, meaning in stages. In newborns, it’s their food intake and homeostasis – the balance between waking and sleeping – which determines their sleep rhythm.

Sleep in the second month after birth

In the second month after birth, the proportion of active sleep begins to decline sharply, and the essential deep sleep increases to about 45 percent during the first four months of life. Plus, medium-deep sleep or deeper sleep develops at this time in which we spend 50 percent of our sleep as adults. However, in babies, it is only 10 to 15 percent of their total sleep.

The high percentage of deep sleep is responsible for the fact that the little ones are less sensitive to external disturbance factors because the wake-up threshold is very high in deep sleep. This is why newborns are difficult to wake up from sleep and are still relatively insensitive to noise, which is, of course, a good thing. However, constant stimulus satiation by light, noise, and other factors, for example, by the television, should be avoided.

When your child becomes more susceptible to sleep disturbances

Many parents and even health professionals are still uncertain about the right length and pattern of sleep for their children. In 2016, based on the current state of scientific knowledge and the expertise of sleep physicians and pediatricians, the American Association for Sleep Medicine (AASM) redefined what is considered standard sleep length for children. According to the AASM

These recommendations refer to a total sleep time distributed over 24 hours, including naps. Scientific studies have shown that children who followed these sleep times over more extended periods benefited noticeably in terms of attention behavior, learning, memory, emotional development, quality/pleasure of life, and physical and mental health.

In contrast, children with sleep problems are more likely to have contact problems with their classmates. They are more often anxious and impulsive, suffer more from mood swings, feel depressed or sad, have more motivation problems and attention deficits, and are more likely to feel stressed and inferior.

What are the genetic effects of sleep deprivation on children? 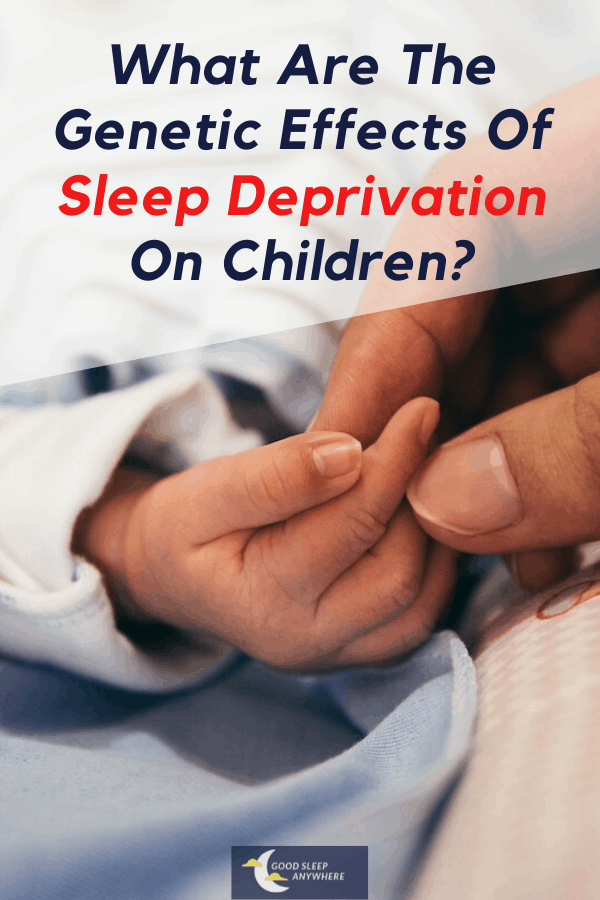 Sleep deprivation in children can even have tangible genetic effects. Studies have shown that the shorter children sleep, the shorter are their telomeres. Telomeres are the tail-shaped end of the molecular chain in which our genetic information is encoded. What is the problem with short telomeres? Short telomeres are associated with faster aging of cells and the development of cancer.

Even before birth, a sleep disorder can affect this significant feature, namely when the pregnant woman suffers from sleep apnea, the pausing in breathing, or periods of shallow breathing during sleep. In this case, the newborn child is often already born with short telomeres.

Telomeres are less critical in healthy adults whose cells, for example, those of numerous organs, are already formed and no longer divide. But in children, in whom the entire organism is in the process of development, telomeres are of great importance. Anomalies of the telomeres can lead to certain diseases such as anemia or liver cell decay (liver cirrhosis).

Do children and young people really sleep so badly or so little?

Yes, more and more studies prove this. It is believed that every fifth child of school age has problems falling asleep and/or sleeping through the night. They wake up at night and/or have difficulty waking up in the morning. Also, many experience nightmares, and some are even suffering from night terrors or sleepwalking. Almost 30 percent of eleven-year-olds struggle with daytime tiredness.

And what about young people? An increasing number of teenagers report that they sleep less than seven hours on average on weekdays. One in five sleeps even less than six hours a night.

That is absolutely insufficient and alarming, especially since healthy sleep is so vital for growth, the sexual maturation process, and the sex hormones. Also, chronic sleep deficit reduces memory and concentration and, therefore, strongly affects performance at school.

How can I tell if my child is sleep-deprived?

Physical signs such as excessive yawning and lack of energy may indicate that your child is suffering from sleep deprivation.

This can be dangerous for children as they are at much higher risk as their immune system is constantly fighting off new bacteria. So if you find that your child is getting sick frequently, check if he or she is getting enough sleep.

How can I tell if my child has a sleep disorder?

And then there is the significant impact of chronic sleep disorder on young people’s mental health. Insomnia and hypersomnia are often accompanied by worries, anxiety, and depression, as well as dissatisfaction and even suicidal thoughts, which confirms that lack of sleep weakens the ability of adolescents to regulate their mood.

It is essential to monitor your child’s behavior and physical health as well as their sleeping habits to determine if they are suffering from a sleep disorder. Some of the most obvious signs of a sleep disorder in young children are these:

At this point at the latest, you should take action and go with your child to see a sleep specialist.

How can you prevent sleep deprivation in children? 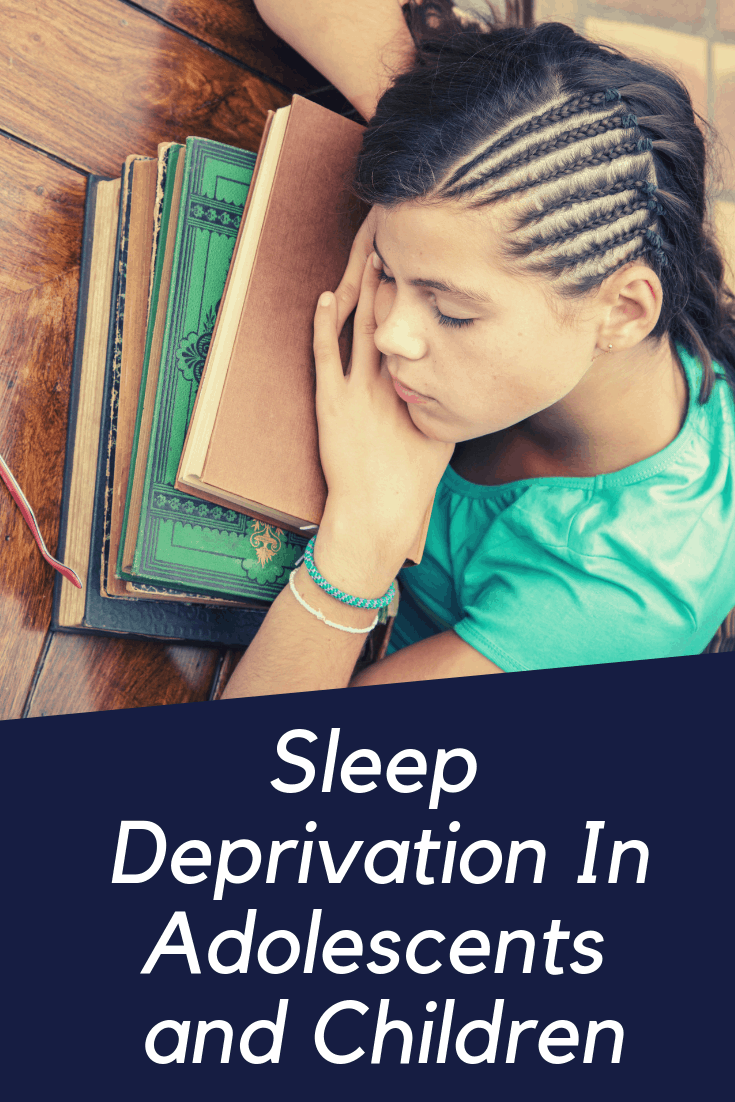 To make sure that your child doesn’t become sleep deprived or develop a sleep disorder, it’s crucial to control their sleeping environment and routine. A healthy sleep routine is vital for both adults and children and is often a deciding factor in whether someone is sleeping well or poorly. When it comes to establishing a healthy sleep routine, regularity rules. Ensure that your child has a routine bedtime, meaning going to bed and getting up every day at the same time – even on weekends.

Also, make sure that your child can relax before going to bed, which supports the sleep process and ensures that they sleep more deeply. Therefore, before going to bed, your child needs to have the opportunity to calm down naturally. This does not mean by screen time! On the contrary, you should remove any external distractions such as TV, the Internet, and mobile devices that might keep their brain too alert. If your child does not have a calm atmosphere or a fixed bedtime routine, he or she may often be irritable or too alert to fall asleep.

Another way to improve a child’s sleeping environment is to make sure that they feel comfortable in their sleeping environment. Buying a quality mattress and cozy blankets can make sleep more comfortable. If your child has allergies, consider buying hypoallergenic sheets to prevent her or him from waking up at night with sneezing or itching. Also, please keep your child’s bedroom cool and light-free, as the body clock naturally winds down for sleep when it is dark.

Finally, help your child to understand the importance of sleep by acting as a good role model. If you, as a parent, give an example of a regular sleep routine, your child will automatically adopt it. Show your child how vital good sleep is for you too and that you like going to bed, and you will find your child enjoying going to bed also.