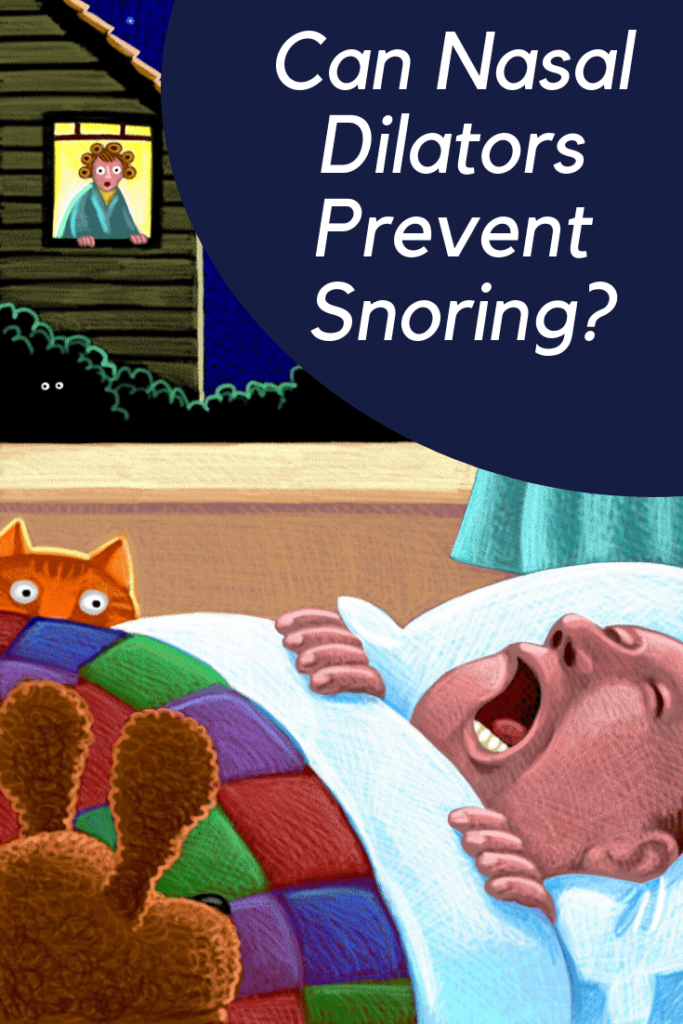 Anti-snoring devices have become immensely popular in recent years. There is now a vast selection of various nasal dilators, jaw holders and mouthpieces which can be purchased over-the-counter in local drugstores or online. If snoring is more than just an unappealing sound to you or if it became intolerable to your bed partner, you may have wondered if nasal strips should be something to try out.

In this article, I want to discuss the pros and cons of nasal dilators: what they are, how and when to use them, and what their advantages and limitations are. Before we dive into nasal dilators, let’s look at some fundamentals of snoring because the reason for your snoring is crucial when it comes to the question if nasal dilators might be a solution for you.

What is snoring and what causes it?

Snoring happens when the air cannot move freely through your nose and throat during sleep. This restriction of air makes the surrounding tissues vibrate, which produces the familiar snoring sound. Snoring occurs mostly during the deep sleep phase.

So if it is obstruction of air what makes people snow, then the real question is what causes the blockage of your nose while asleep.

We all snore from time to time, e.g., in case of a cold or flu when our nose is congested or when we sleep in an overheated room and the mucous membranes dry out. Under these circumstances unblocking the nose can drastically reduce snoring, but nasal obstruction has many causes with each of them having different solutions.

If you are a chronic snorer, it is most likely due to the anatomy in your mouth such as a narrow throat, or due to physical conditions like the relaxing of the airways or the jaw falling backward during the night. Here are some of the leading causes of this condition:

Important to note is that habitual loud snoring can be a symptom of a more serious sleep disorder called obstructive sleep apnea (OSA). People with OSA stop breathing several times during the night caused by total blockage of the airway. The breathing arrests can take from a few seconds to well over a minute which can have serious effects on the cardiovascular system.

If you snore on a regular basis that does not necessarily mean you are suffering from OSA, but it can be a precursor. Therefore, it is worth finding out the cause of your snoring to rule out potentially more severe sleep disorders. 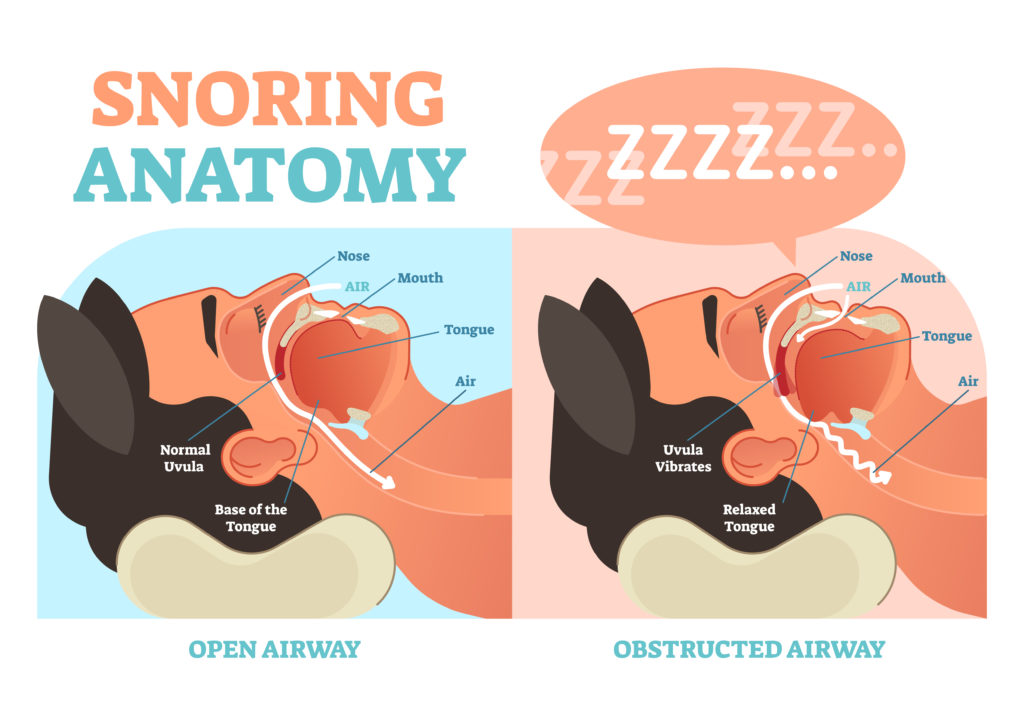 What are nasal dilators?

There are two main types of nasal dilators available, and the difference is whether they are applied internally or externally. Nasal strips like Breathe Right are small adhesive strips placed externally across the bridge of your nose to act like a spring which slightly pulls open your nostrils, so they don’t collapse during inhalation.

The other type of nasal dilators is a soft cone or clip placed inside your nostrils. They come in a variety of shapes, sizes, and materials. Max-Air Nose Cones are well known internal nasal dilators.

Both, internal and external devices are designed to mechanically open the user’s nasal passages to increase airflow and reduce nasal resistance.

Since when are nasal strips being used?

Nasal strips were introduced in the 1990s not primarily as a sleep aid but to enhance nasal breathing during exercise. Apparently, American football players were the first who used nasal strips because they had difficulties to breathe while wearing the mouth guard. Later, nasal strips gained popularity after being used by several athletes at the Olympic Games in Atlanta in 1996 to improve aerobic performance – although there is limited evidence that nasal strips help to perform an athlete better.

From then on, nasal dilators attracted the attention of sleep researchers, and different clinical testing began. Overall, clinical tests showed promising results concluding that nasal strips help to increase nasal airflow during inhalation and therefore may be a good alternative to nasal sprays.

However, regarding the intensity of snoring the results were not always positive; it mainly seems to depend on one’s anatomy as well as on the root cause of the snoring.

How do nasal dilators work?

Nasal dilators enlarge the nasal cross-sectional area. If the cause of your snoring is chronic or acute nasal blockage such as in case of a cold or allergy nasal dilators can actually help. Also, pregnant women and people with a deviated septum might benefit from the usage of nasal dilators.

Studies have shown that in people who complained of nasal obstruction during sleep due to congestion, an internal dilator like a soft cone placed inside your nostrils might work better than an external device.

Nasal dilators may also be beneficial for people with simple snoring associated with e.g. rhinitis or nasal valve stenosis. In the same study, people reported that snoring frequency was significantly lower when using nasal strips. Even more so, symptoms like morning dry mouth occurred less, and the overall sleep quality seemed to be improved when using a nasal strip. This could be related to the fact that in some people they saw an improvement in oxygen saturation during sleep.

If you are suffering from obstructive sleep apnea and are wondering if nasal dilators might be of help for you, you definitely should consult your doctor first.

Important to know is that nasal dilators cannot directly treat a sleep disorder like OSA. However, in case you are suffering from nasal congestion along with the OSA you might want to give an intern nasal dilator a try. If you are using a CPAP, you need to find out if your type of CPAP works while using a nasal dilator.

What are the limitations of nasal dilators?

Also, a nasal dilator might fall out during the night or even worse, gets inadvertently inhaled. Different types of internal nasal dilators may be more or less prone to inhalation, depending on the construction. The dilators may also break into smaller pieces, because of weakening by longtime use.

What are the advantages of nasal dilators compared to nasal sprays? 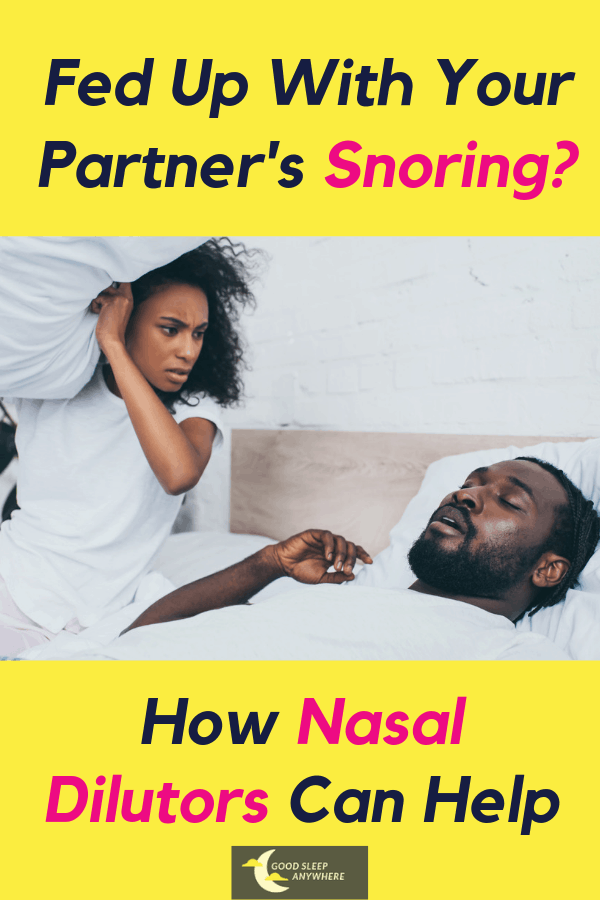 Nasal sprays are often used to reduce inflammation in the nasal passages. However, you might worry about possible side effects and potential rebound effects that can occur from continual long-term use make.

So if you are looking for a natural alternative, a nasal dilator could be a good option for you. A nasal dilator is a mechanical aid that opens up the nasal passages immediately, and they will stay open until you take the device out.

There are three significant advantages of nasal dilators over a spray:

The only side effect might be some skin irritation.

An advantage of internal dilators over the external dilators is that they are reusable and you can use them for about three months. Make sure that you don’t choose any dilators made from plastic or rubber, but made of surgical grade silicone. These are more comfortable to wear and easy to keep clean and free from bacteria.

Generally, nasal dilators are harmless and worth a try, especially if a blocked nose causes your snoring. Because they are non-medicated, they can be recommended as an alternative treatment to nasal spray. But it is important to mention that they do not help all snorers. Also, a nasal dilator is a mechanical aid device and not a permanent fix for the root cause of your snoring. You will need to sleep with the device outside or inside your nose every night for the rest of your life.

A good overview of the different clinical tests for nasal dilators can be found in the International Journal of General Medicine.

One Reply to “Can Nasal Dilators Prevent Snoring?”