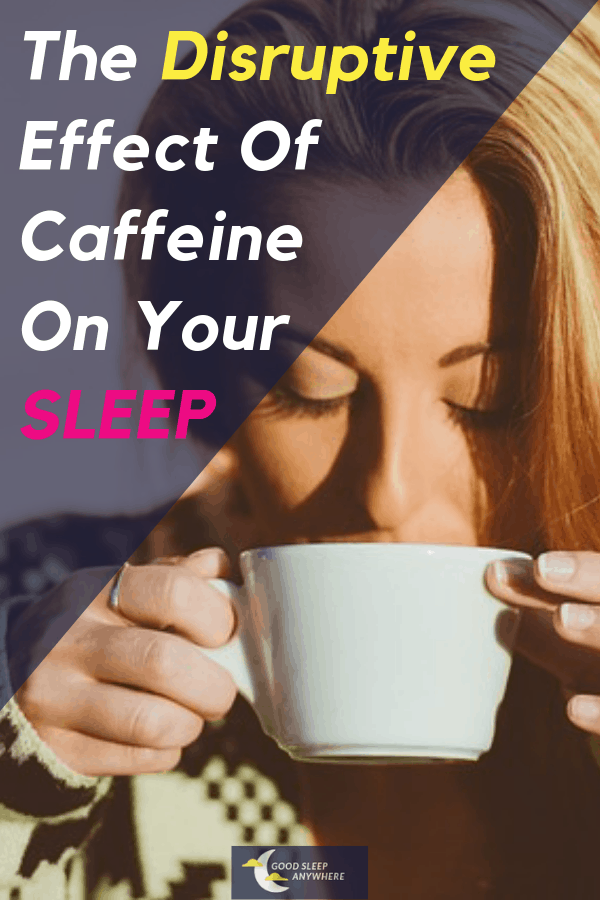 Coffee is useful for many occasions. Especially if you’re groggily getting started in the morning, an Americano or cappuccino will get you going.

While a cup of coffee or two in the morning in most cases won’t interfere with your sleep at night, consuming caffeine later in the day can affect your ability to fall asleep significantly. In fact, it might well be the very reason for your insomnia. On top of that, in case you are suffering from increased daytime fatigue, again caffeine might be the substance to blame because it has detrimental effects on your subsequent sleep.

If you have tried all kinds of crazy things to find some sleep, but still can’t wind down at night, maybe the only thing to do is to skip the afternoon coffee break. Read on if you want to find out why the sleep-disruptive effect of caffeine is a strongly underrated risk for insomnia.

What is the effect of caffeine on your sleep?

The two main factors that determine your sleep-wake-rhythm are your 24-hour circadian rhythm, the day-night rhythm that makes you feel tired or alert at regular times throughout the day and the night, and adenosine, the chemical in your brain which creates your sleep pressure. Adenosine works in a way that the longer you are awake, the higher is the concentration of adenosine in your body, and hence, the stronger you feel the desire to sleep. The level of adenosine usually peaks after being 12 to 16 hours awake.

And this is precisely where the stimulating effects of caffeine come into play: Caffeine and adenosine latch on to the same receptors in your brain. That means if you drink a cup of coffee, those receptors are getting occupied with caffeine instead of adenosine. In other words, caffeine is hijacking the receptors and adenosine is left blocked out. As a result, your brain loses the sleepiness signal it’s normally getting from adenosine.

Why is the timing of your caffeine intake so crucial?

The stimulating effect of coffee may not be news to you. But did you know that it can take more than 10 hours for your body to flush out caffeine from your system?

Like with other drugs – and caffeine is a (legal) drug – the efficacy of caffeine is measured in half-life, referring to how long it takes to reduce 50% of the substance’s concentration in the body. The half-life of caffeine is around six hours which means, if you have a mood-boosting cup of coffee at around 4 pm, at 10 pm you still have half of the stimulating caffeine circulating in your body. Or maybe you have the habit of a regular after-dinner-coffee, let’s say at around 7:30 pm. In this case, even well after midnight you still have half of the caffeine left in your system.

And a dosage of half a shot of caffeine is still plenty to keep you wide awake. Keep in mind that caffeine acts as a central nervous system stimulant leading to increased alertness. It can have a variety of different side effects ranging from nervousness and restlessness to high blood pressure and rapid heart and breathing rate. For someone with anxiety, it can even trigger an anxiety attack. That’s because the jittery effects of caffeine are similar to those of a frightening event stimulating your “fight or flight” response.

Although everyone reacts differently to caffeine and the dosage is also an essential factor, it is evident that caffeine does exactly the opposite to what you need to wind down and initiate peaceful rest. The problem is that many people don’t know that it takes 10 hours or more to remove caffeine from your body. They just don’t make the connection between their insomnia and the cup of coffee they had at dinner the night before. Therefore, the timing of your caffeine intake is crucial to prevent a night of poor sleep.

Coffee is by far not the only food containing caffeine. Foods and beverages derived from cocoa beans, kola nuts, and tea leaves are other common sources of caffeine, like colas, teas, and chocolate. Also, energy drink, cereals, candy bars, ice cream, and even yogurt may have caffeine. Besides, many fever-reducing or pain-relieving medications, as well as some weight-loss pills, contain quite a bit of caffeine.

Which tea is highest in caffeine?

Surprisingly, tea leaves often have more caffeine than coffee beans before they are brewed. However, during the production and brewing process tea usually is diluted more than most coffees. The caffeine levels also vary depending on how strong you like your tea and on what type of tea you drink.

White tea has the least amount of caffeine and black tea the highest, while the caffeine content in green tea falls mid-range – except for Matcha tea. Matcha is made from crushed whole tea leaves, so the caffeine levels are a bit higher than that of standard green tea. In fact, Matcha caffeine levels can equal half the level of a black cup of coffee. Rooibos and herbal teas have no caffeine.

Here is a basic overview from lowest to highest caffeine content:

As a reference, coffee has around 100 mg of caffeine, depending on the type of coffee.

Is decaf coffee an alternative to normal coffee?

Don’t be fooled by the term “decaf”. Decaf not the same as caffeine-free and decaf coffee almost always contains caffeine. There is significant variance in the amount of caffeine in a cup of decaffeinated coffee. Some decaf coffees contain up to one-third of the caffeine found in regular coffee.

So if you drink decaf coffee, it is often difficult to tell how much caffeine you are actually consuming. Based on the assumption that decaffeinated coffee contains hardly any caffeine, you may drink several cups and end up consuming more caffeine than with drinking regular coffee. Just for comparison: decaffeinated espresso drinks such as lattes contain two shots of espresso. As a result, they can have as much caffeine as a cola can, about 30 milligrams.

Why can some people drink a lot of coffee and still sleep soundly?

Every person responds differently to caffeine. While some people can drink coffee at any time of day and it doesn’t affect them at all, it can be a real sleep killer for others. If you can still feel the jitters triggered by the expresso after lunch at 5 pm your most likely belong to the second group.

Apart from the time of consumption the sensitivity to the effects of caffeine varies depending on age, regular caffeine intake, and genetic variability. Responsible for removing the caffeine from your system is an enzyme in your liver. Based on the genes, this process is done more efficiently in some people than in others. If you belong to those where the elimination process of the caffeine is rather slow, it is very likely that an early afternoon espresso still keeps your awake at 11 pm.

Aging is also an important factor as the caffeine removal process naturally slows down the older we become, hence our caffeine sensitivity increases.

Why do you get sleepy after drinking coffee? 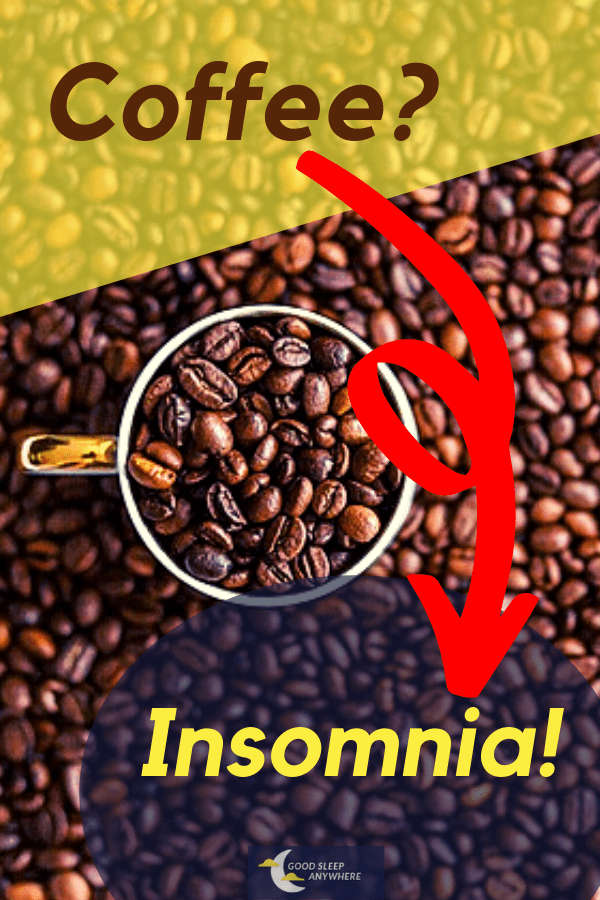 Instead of boosting your energy and keeping your awake, coffee sometimes makes you very tired. Why is that? One reason why coffee can make you sleepy is its dehydrating effect. Coffee is a diuretic which means it makes you need to urinate. If you drink it to stay awake, you can quickly end up in a vicious dehydrating cycle that makes you feel exhausted.

But there is another health disrupting phenomenon related to caffeine intake: the caffeine crash, a sudden strong urge to sleep during daytime. To explain the caffeine crash in more detail, we need to come back to adenosine, the chemical in your brain which creates your sleep pressure.

As long as the caffeine is in your system, it blocks out adenosine. However, this does not mean that adenosine is inactive; it still builds up and accumulates in your body. And once the caffeine wears off, the extra amount of adenosine kicks in so that you feel it all at once in a rush. Your energy levels drop to zero, and so does your mood. All you can now think of is to fall asleep immediately.

Timewise this strong desire to sleep will occur most likely either in the early morning or just after you have gotten up, which of course make things complicated. You may end up consuming even more caffeine to stay awake which in turn leads to constant high concentrations of adenosine in your body. The result is a dependency cycle producing both symptoms: extensive daytime sleepiness due to chronic sleep deprivation as well as insomnia at night.

You might have heard it often that drinking coffee or any other caffeine intake is safe when consumed in low-to-moderate amounts. Also, newer research shows that coffee may have some great health benefits and helps protect us from several diseases such as diabetes, Parkinson’s disease, and liver disease.

However, the disrupting effect of caffeine on our sleep is not only well proven, but it is often also highly underrated. Keep in mind that regarding the impact of caffeine on the quality of your sleep it is not so much the dosage of your caffeine intake but merely its timing and your sensitivity level!

Therefore, if you do experience frequent restless nights or even suffer from insomnia, it is important that you make the connection between the time when you had your last caffeine intake and your poor sleep.

An easy way to find out if it’s caffeine-containing food or beverages what keeps you awake at night is to stop consuming any caffeine after lunch. If your sleep improves after a few days, you have found the culprit of what has secretly sabotaged your energy and performance levels and what prevented you from getting a good night’s sleep: caffeine.