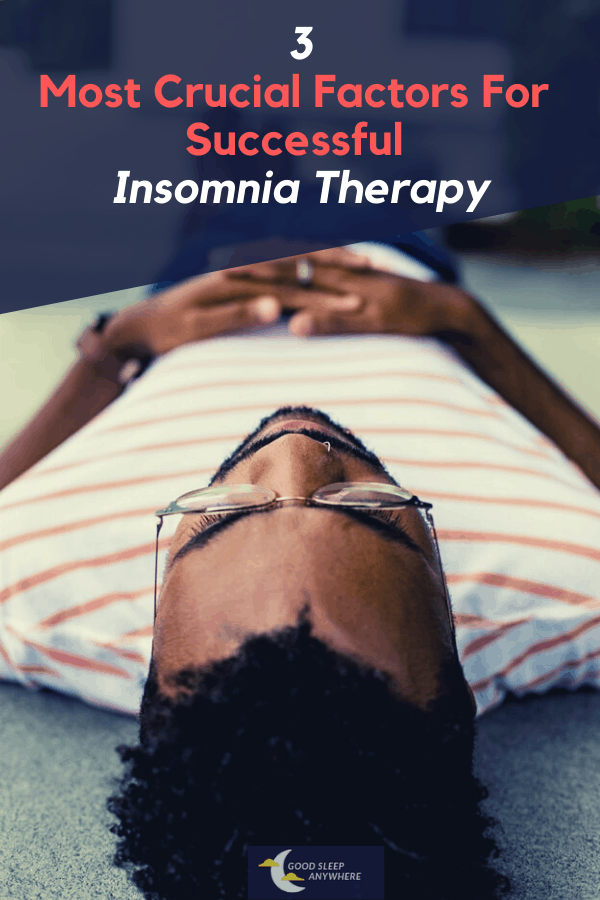 Starting a behavior therapy for insomnia can be intimidating and confusing because it’s very different from medical treatment. Whether it’s CBT (Cognitive behavior therapy) or ACT (Acceptance and Commitment therapy), in both cases, you are taking a behavioral approach to your sleep problem, likely because your insomnia has a psychological component and is not caused by any other diseases.

During behavior therapy, you and your therapist will be looking at some pretty basic questions, including some that you might not have expected to find in therapy. My experience with this approach is that it can send you on a bit of a rollercoaster ride. All kinds of different emotions can come up: Interest, boredom, fear, frustration, anger, sadness, clarity, confusion, and so on.

So it’s better to be prepared and to go in with the right expectations. Here are three crucial factors that may contribute to the success of your insomnia therapy.

Behavior therapy is not necessarily overwhelming – it’s just that you should be prepared to let anything that comes up during the treatment show up. You can think of it like cleaning a dirty glass with mud in the bottom: The only way to do this is to stir up the mud. Some things may be stirred up, and for a while, it may look worse before it looks better, meaning the results may not become apparent until later in the treatment. Especially if old issues come up, it can sometimes seem like you’re going backward when you are really going forwards.

If you’re moving ahead, you will know it and see it in your life. It’s just that you can’t be sure of this on a week to week basis. So stick to the agreed period of time, like six sessions or whatever it is in your case – no matter what, even if you want to quit. Create some space within which to work and don’t impulsively judge the treatment. Otherwise, you won’t really know whether this treatment is useful or not.

When starting a new treatment, most of us have the expectations that it will work and that soon we will sleep soundly. Of course, we have; otherwise, what’s the point of going into treatment?

However, the truth is that for the therapy to be successful, it’s crucial to let go of any expectations and just accept what is right now. In the beginning, the goal is not to be able to sleep but to accept that your sleep works as it is now without trying to repair it. Instead of learning to sleep better, the emphasis is on learning to rest. Of course, enjoy it when your sleep does get better right from the start, but don’t come to expect it. Otherwise, sooner or later, you’re bound to be disappointed.

3 – Demonstrate the willingness to let go of control

This approach requires your willingness to give up all the control strategies that your mind has put in place, intending to solve your sleep problem. Keep in mind that sleep is an unconscious process you can’t force to happen. So your problem-solving control strategies often make things worse and fuel further wakefulness.

The idea of letting go of control and approaching insomnia with acceptance rather than fighting it is not easy; it’s probably one of the hardest things when going into therapy. You probably want to give up; that’s normal.

However, I found that in those moments, it helped a lot to remind myself of all the things I’ve tried to get rid of insomnia and all the energy and frustration that it caused when I realized that it didn’t work. And there is a great metaphor that illustrates this – the man in a hole metaphor.

Are you the man in a hole?

Imagine being placed in a field, wearing a blindfold, and you’re given a small bag with tools. You are told that your task is to walk around the area blindfolded and live your life. So you start walking around, and sooner or later you fall into this big hole.

One tendency you may have is to try to figure out how you got into the hole – which path you actually took. You probably say to yourself: “I went left and over a small hill, and then I felt in it,” and so on. In a way, that may be true; you are in the hole because you took that exact path. But knowing that is not the solution to knowing how to get out of the hole.

And even if you hadn’t taken exactly that path and gone somewhere else instead, you might have fallen into another hole anyway, because without your knowledge, there are countless wide, fairly deep holes in this area.

Anyway, so now you are in this hole, blindfolded. In such a predicament, you would probably take the bag of tools you were given and use them to try to get out of the hole. Suppose the tool you were given was a shovel. So you dutifully start digging, but pretty soon you realize that you are not getting out of the hole. So you try to dig faster, or with a bigger shovel, or in a different style. More, different, and better. More, different, and better.

However, none of this makes any difference, because digging is not the way out of the hole; it just makes the hole bigger. Pretty soon, this hole is vast. It has several rooms, halls, and caves. It’s a sophisticated hole now. So maybe you pause for a while and try to come to terms with it. But it doesn’t last because you’re still in the hole.

This is like what happened to your insomnia. It gets bigger and bigger until it has become a central point in your life. You know that none of your coping strategies has worked because they can’t work. It’s like trying to dig yourself out of that hole – it’s hopeless.

The problem is not in the tools…

That doesn’t mean there’s no way out of the hole. But within the system you have been working, no matter how much motivation you have or how hard you dig, there is no way out. The things you’ve been taught don’t work, although they might work just fine elsewhere. The problem is not in the tools but in the situation in which you use them.

So your job right now is not to figure out how to get out of the hole. That’s what you’ve been doing all along. In the position you are in now, it would not work even if you were given other things to do. Even if they gave you a ladder now, it wouldn’t help. You would only try to dig with it. And ladders are terrible shovels. If you have to dig, you already have a perfect tool – the shovel.

The real issue is not the tool; it is the agenda – it’s the digging.

The truth is that you can’t do anything else until you let go of the shovel and the digging. You have to make room for something else, and that’s accepting that you are in a hole.

I know that this is counterintuitive, and your mind will fight it because it doesn’t like that plan. The shovel seems to be the only tool you have. If you let it go, it looks like you are condemned to stay in the hole forever.

So why doing it?

It’s because it is liberating. You realize that nothing has worked so far and that you have suffered enough. If you let go of what you have tried so far, you end the constant struggle and are ready to do something else.

This requires a certain attitude: an attitude of openness and willingness to experience everything that shows up. Even if your experience is difficult, painful, or unpleasant, you can be open to it and make room for it rather than running away from it or struggling with it.

Letting go of control and the struggle

So the essential factor for successful insomnia therapy is to let go of unhelpful control strategies and the struggle with your painful thoughts and feelings. Instead, give them some space to breathe and let them be as they are. This does not mean to like or want them. It simply means, instead of fighting them, resisting them, running away from them or being overwhelmed by them, make room for your experiences and let it be. That’s when real change can happen, and when you start to heal.

Have you been in behavior therapy for insomnia? What were your experiences? What do you think are the biggest challenges when starting a new approach to insomnia treatment? Please share your thoughts in the comments below!