Whenever you hear someone snoring, is your first thought also that the snorer must enjoy his slumber peacefully? The reality is, that snoring can be more than a common bedtime nuisance. It could be a sign of obstructive sleep apnea (OSA), a potentially dangerous sleep disorder strongly linked to cardiovascular diseases, along with other serious health issues.

So in case you or your bed partner are snoring it is time to stop the whining and to find out if you or your partner might be suffering from obstructive sleep apnea.

Why can obstructive sleep apnea be dangerous?

Obstructive sleep apnea (OSA) is a potentially serious sleep disorder in which people experience repeated respiratory arrests while sleeping. The breathing cessation can last from a few seconds to well over a minute. As a result, the blood and the heart are not sufficiently supplied with oxygen which can have severe consequences and lead to diabetes, high blood pressure (hypertension), a stroke or a heart attack but also affects the brain functions.

There are several types of sleep apnea, but obstructive sleep apnea is the most common one. Besides the low oxygen saturation in the blood, there are two more associated complications caused by OSA related respiratory failure: a release of high levels of stress hormones and disrupted sleep, both strongly affect your health and impact the quality of your life. Each effect or a combination of these effects is what can make obstructive sleep apnea dangerous.

The cause of sleep apnea is an obstruction of the airways which leads to an insufficient oxygen supply. During sleep, the throat muscles relax and block the airways causing repeated episodes of upper airway obstruction. 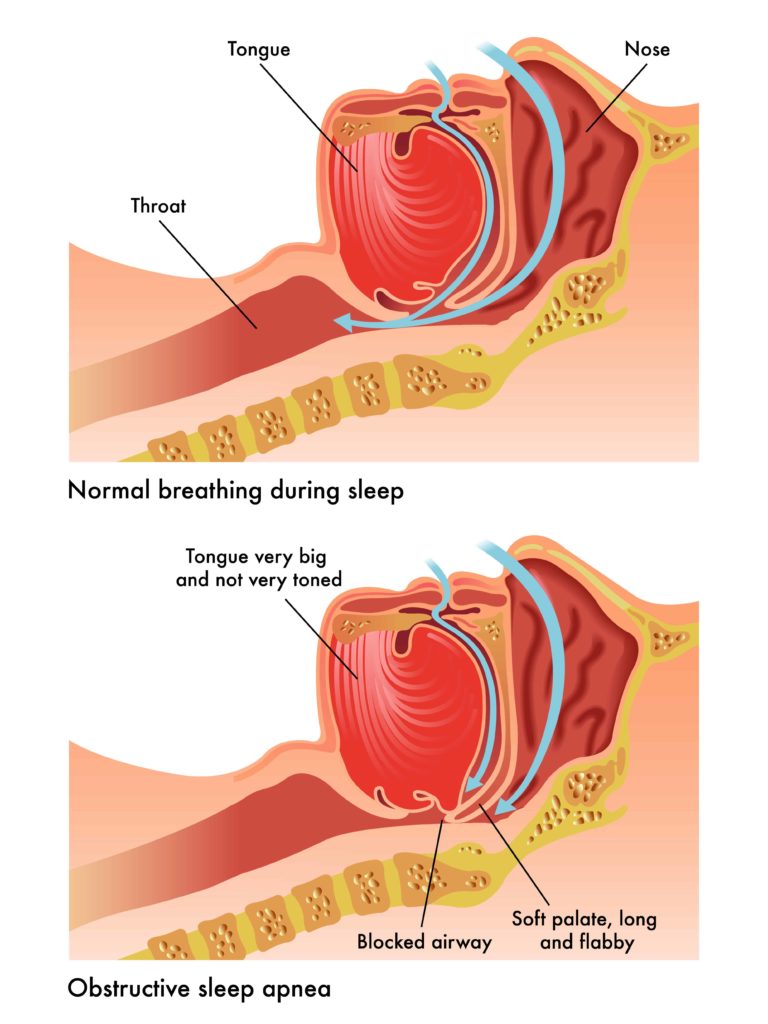 Obesity is the most significant risk factor for OSA because it leads to an enlargement of soft tissue in the area of the airways. However, you can also be of normal weight but have a small, receding jaw which puts pressure on the airways, especially during sleep, when the muscles are relaxed, and the airways get obstructed.

OSA is approximately two to three times more common in males than females, although the gap narrows when women undergo the menopause. OSA can be detected by loud snoring and choking or gasping during sleep. However, often people with OSA do not notice it for a long time, or they are not correctly diagnosed. It is said that over 80 percent of affected people are unaware of their disease and OSA often remains undiagnosed. Therefore in most cases, people with OSA receive either the wrong treatment or no treatment at all.

What is the relationship between snoring and obstructive sleep apnea?

Snoring is probably the most common feature of OSA. About 90 percent of people with OSA report snoring. However, if you snore that does not necessarily mean you have OSA but it can be a precursor of obstructive sleep apnea.

OSA is an almost complete obstruction of the airways, whereas snoring leads to a partial blockage. Of course, both have an adverse effect on your breath, albeit with a gradual difference. It all depends on the severity of your respiratory failure. The intensity of your snoring, gasping or choking as well as of the periods of silence followed by loud snoring can tell you how acute your respiratory distress is.

However, the risk for cardiovascular disease may actually begin with snoring, long before it becomes OSA.

Many people are not at all aware of their snoring and restless sleep. They might wake up in the morning with a dry mouth, hoarseness, and sore throat and suffer from daytime sleepiness, fatigue, and nervousness even after a night of long sleep and ask themselves: “What is wrong with me?” Until one day the bedroom partner draws their attention to the loud snoring by either telling them or because they have decided to leave the bedroom to find a quieter place to sleep.

In the long term severe snoring, or so-called obstructive snoring, strains the cardiovascular system and is often a precursor to the obstructive sleep apnea syndrome. Therefore it is crucial not only be diagnosed early but also correctly, whether it is still “normal” snoring or already a symptom of a more serious sleep apnea.

Due to the frequent respiratory arrest, the oxygen level in the blood drops continuously until the body activates its natural alarm system and releases stress hormones, such as adrenaline or cortisol. As a result, you wake up gasping or choking, an indication that you start breathing again.

Interestingly, affected people are not aware at all of the frequent wake-up reflexes which can occur up to several hundred times per night. Not only that this upsets the entire sleep rhythm, but more importantly, the affected person barely reaches any deep sleep, the most critical sleep stage to restore your body and mind.

Besides, people with obstructive sleep apnea often have to get up several times at night to go to the bathroom. Other aggravating symptoms are excessive perspiration during the night and strong thirst in the morning accompanied by headaches and dizziness.

People with OSA don’t feel rested when they wake up in the morning. However, even more serious is the fact that the disrupted sleep can result in excessive daytime sleepiness, microsleep (spontaneous fatigue attacks), impaired concentration and sometimes even depression. 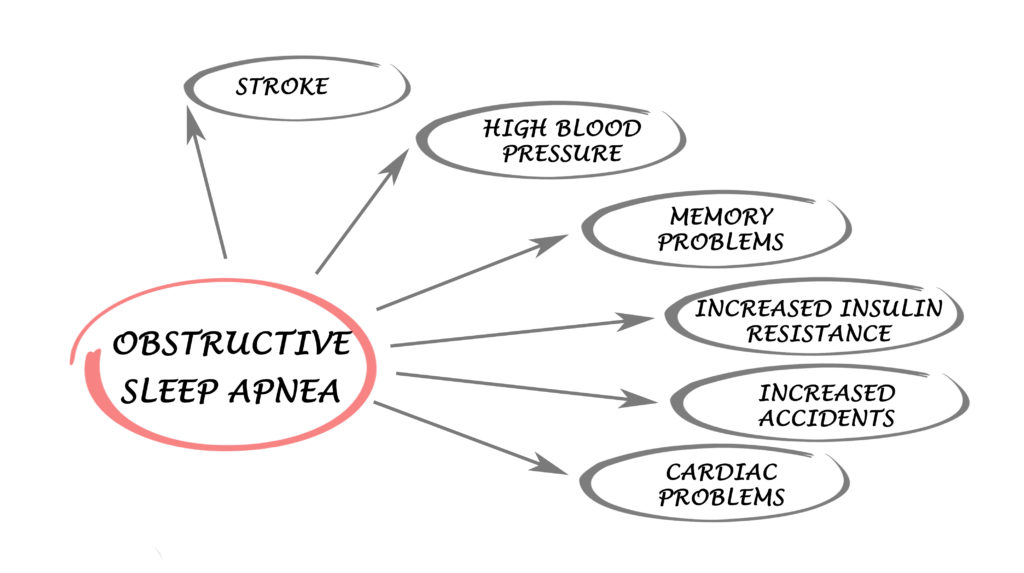 What is the relationship between high blood pressure and obstructive sleep apnea?

In normal people, blood pressure drops by 10 to 15 percent at night. By contrast, people with OSA are experiencing a substantial increase in nocturnal blood pressure. Even more so, hypertension remains permanently high also during the day.

There is a close connection between OSA and high blood pressure (hypertension). Parallel to the interrupted breathing there is almost always a significant increase in blood pressure caused by the lower oxygen concentration in the blood. The more often and the longer the respiratory arrest occurs, the higher the blood pressure because the heart is working overtime when it is receiving less oxygen. On top of that, this process also increases the release of endothelin, a hormone which constricts blood vessels and raises blood pressure which puts additional strain on the cardiovascular system.

Hypertension promotes the development of severe cardiovascular diseases such as a stroke or a heart attack. That’s why it’s important to get to the bottom cause of hypertension and that is, in this case, obstructive sleep apnea. However, many people who are either not diagnosed correctly or unaware of the disease often end up in a lifelong treatment based on inappropriate drugs. If the real cause of hypertension, the obstructive sleep apnea, is not recognized, these patients are not only risking to suffer from severe side effects of the wrong therapy, but the drugs they are taking might even adversely affect the natural wake-up reflex and aggravate the sleep apnea.

Therefore, the most dangerous thing about obstructive sleep apnea is ignorance and wrong therapy.

How can you know if you have obstructive sleep apnea?

If you think you may suffer from obstructive sleep apnea, maybe a good start is to take a simple test which you can find online from different organizations. Depending on the result you should discuss the possibility of OSA with your doctor.

These are just some common symptoms of sleep apnea. If several of the signs apply to you, then there’s a chance you may have sleep apnea. 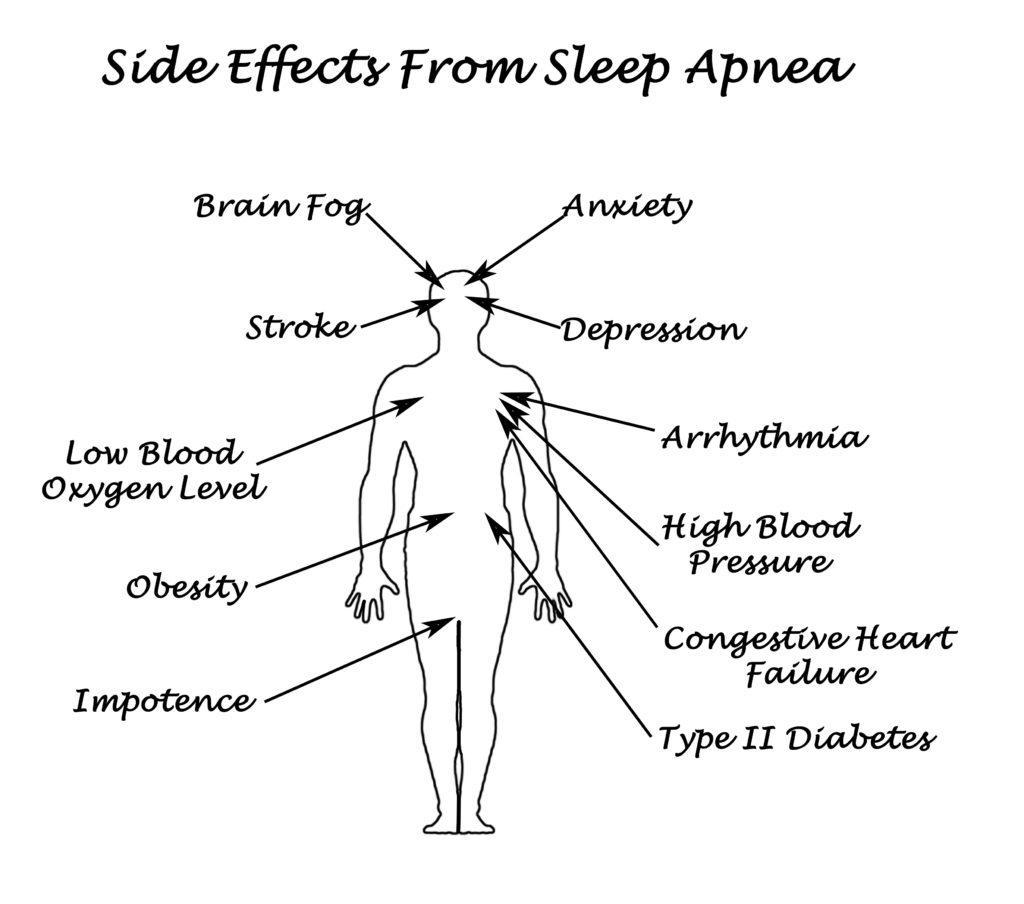